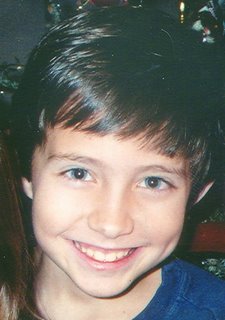 Few things have awakened me from blogging slumber over, lo, these last three months. But then every day isn't August 7, the day our firstborn was first born.

Andrew is 10 today. And this is how it happens, i.e. the passing of time. He'd never learn to drive or graduate from high school and college or get a job or get married or give us grandchildren if he never turned 10. So I'm preemptively blaming all of my future and wistful reminiscences of his childhood on today.

I remember everything that's ever happened to Andrew.

The night he was conceived. (Sorry, no details other than to say Amy was there, too.)

The time a couple of weeks later when Amy sang "Breath of Heaven" in a Christmas musical at church, completely unaware that she was, like Mary in the song, carrying a baby boy.

The day he was born. Morning had broken along with Amy's water. Several hours later, we were in the delivery room at a hospital in Dallas named for the same St. Paul who once told the church in Galatia he so desperately wanted them to be like Christ that it was like he was himself experiencing the pains of childbirth. (Out of sheer self-preservation, I opted against quoting that particular passage to Amy in labor.) Paul wouldn't have lasted two contractions as a hospital chaplain before a postpartum mommy mob strung him up by a giant Philippian tube and took turns giving him a homemade epistle-otomy until he retracted every reference which dared to suggest he had the first clue what it was like to have a mass of humanity rearrange his indoor furniture and emerge from his loins.

As Amy endured the literal travails of childbirth, I cheered her on vigorously, if not truthfully. When the doctor said he could see the top of Andrew's then-gigantic melon - I have no idea whom he got that from - I took one peek and grabbed a Snickers because it was obvious, in my medical opinion, that we weren't going anywhere anytime soon. But I figured what Amy didn't know wouldn't hurt her, which was good because what she did know was hurting plenty. As she labored, I kept cheerleading, "You're doing great! You're almost there!" All while thinking our son would be in kindergarten before we got him out of there. But he made it safely and promptly aced his first exam, the APGAR, which is taken 10 minutes after delivery and measures Activity, Pulse, Grimace, Appearance, and Respiration. If they'd have given me the same test, I'd have flunked.

I remember the first night at home when we'd determined we might as well get him used to his crib instead of letting him sleep in our room. No use in coddling the boy. After about two hours of being good parents, we caved and brought him into bed with us where he proceeded to show us what he thought of our tactics by detonating his bowels all over the sheets as we slept.

I remember thinking my dad's favorite baby moniker, "Peach," fit Andrew's plump, infant exterior and fuzzy noggin nicely and calling him that from then on.

I remember when he was 2 and forgot the term "threw up," instead telling us he "dropped out" and one time later, in mid-retch, reassuring us, "It's okay. I'm happy." The happy hurler.

I remember being at the dinner table when he was 3 and prayed, "Thank you, God, for drinks," which wasn't funny until Amen when we realized we'd forgotten to pour him one.

I remember when he learned to read. At 4.

I remember the first time he saw Madagascar. The map, not the movie. He was maybe 5 when he got one of those talking globes with the stylus you point to find out about this place or that. Sitting at a restaurant with Amy's folks, he said, "Papa, did you know the capital of Madagascar is 'Antananaweevo.'" (I won't bother to give the correct spelling. Trust me, it wouldn't help.) Our friends, Texas State Representative Bob Hunter and his wife, Shirley, were seated nearby. She turned, looked at Andrew incredulously and said, "Did he just say what I think he said?" We're afraid so.

He's both absent-minded - whistling to himself as he steps over his backpack, which Whistler's Mother puts by the door so he won't forget - and a professor of both facts and faith, having never met a man, woman, or child with whom he wouldn't be happy to share a story and get to know.

He gorges on chocolate and music and literature, sometimes simultaneously. He treats people kindly for no other reason than simply their humanity. He adores his grandparents, aunts, uncles, and cousins, preferring nothing above everyone being together. His best friends are the brother and sister who share his room. He respects his mother and honors his father.

I've witnessed him willingly give away his best toys to a family who'd lost everything in a fire. I've seen him laugh 'til he cried and cry when his heart was tugged. And I've heard him a million times sing at the top of his lungs to a God he believes is good and loves him dearly.

He's not perfect, chiefly because he half-came from me. But he is 10. Today.

This is my son, Andrew. And in him, I am well pleased.
Posted by Grant Boone at 2:51 PM

Happy, happy birthday to Andrew. What an incredible kid. Can we start arranging marriage between him and one of my daughters right now?

Also - is it just me or does his photo look just a LITTLE bit like that of a young Tom Cruise?

Please send our warmest 'Happy Birthday' to Andrew. Also, next time y'all are in Grayson, pull him up in a little red wagon and we'll let you borrow a Disney Sing-Along-Songs movie.

Praise God, Grant and Amy, for a wonderful son.

Grant, I'm laughing out loud at your description of Andrew's delievery.

Truer words were never spoken. Andrew is practically perfect in every way and this is from his Nana who has five other grandchildren!!! God is already using him mightily. I love you precious child of 10 years.
Nana

Now...coupla things. First of all, thanks for not calling me when you came to Nashvegas, dork. Secondly, the new Will Ferrell movie couldn't be any funnier. The only way I would have enjoyed it more is if I'd seen it with you. I can't wait to trade lines with you. GO SEE IT!!!!