A Leg to Stand On: Knee, Mediate Collateral Damage in Woods' Pyrrhic Victory 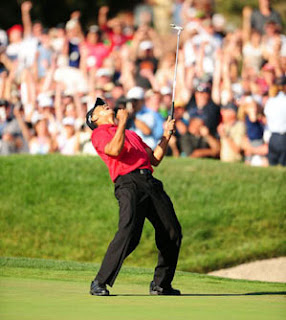 First off, congratulations to Tiger Woods for finally shedding the distinction of Best Golfer Without a U.S. Open Title Since I Began Writing This Column. Father’s Day weekend marked the second anniversary of Grant Me This.

Traditionally, one commemorates such milestones with specific gifts, e.g. gold for 50th, silver for 25th, calamine lotion for the 7th. To celebrate GMT’s 2nd, we spared no expense. Continuing a glorious tradition that dates back to last June, we got you another heaping helping of U.S. Open headlines:

As if the first 71 holes weren’t thrilling enough, Tiger Woods’ absurdly pressure-packed and tournament-tying birdie on 18 Sunday put an exclamation point on a hair-graying weekend and an electrifying ellipse on the championship. Ignore the whipper-snappers who advocate following Sunday's round with sudden death – this event is eminently worthy of the USGA’s 18-hole Monday playoff format.

It’s already a great trivia question: who led the 2008 U.S. Open after the first two rounds? Justin Hicks and Kevin Streelman, with matching 68s Thursday, and Friday’s frontrunner Stuart Appleby gave Black’s Beach – the shoreline beneath Torrey Pines – new meaning. Those three shot scores of 77, 79, and 80 in the rounds into which they took their leads.

NBC had a great shot of Woods giving daughter Sam a pacifier to keep her from being upset that he had to go accept his U.S. Open trophy Monday afternoon. I wondered if he’d been carrying a separate passy for Rocco, just in case. But Mediate knew when to quit talking to Tiger and bring someone else into the conversation, such as his caddie, a rules official, the walking scorer, wild animals. Rocco’s endeared himself to fellow players and galleries through the years with his high-octane personality. He’s always been the best interview on Tour; now he’s getting his due as a good player from an international audience. And last weekend’s performance guarantees the 45-year-old enough cash, playing perks, and endorsement potential to tide him over to his Champions Tour debut five years from now.

Phil Mickelson began the week hoping to win his first U.S. Open on the course he grew up playing and down the road from where he still lives; by Saturday, he was simply trying to get off the par five 13th in single digits. With Woods nursing that nasty knee, Mickelson made a healthy quad. And that one-legged snowman Saturday effectively ended any chance of catching the one-legged Tiger. That it happened on the same hole where Woods a few groups later would turn Torrey on its ear by jarring a 65-footer for eagle to get back onto the front page of the leaderboard couldn’t have been pleasant.

In fact, I don’t think Woods could have been more frustrating to Mickelson if he’d driven over to his house and done donuts in the front yard. Not only did Tiger win the championship Phil cherishes on the course he loves, it must’ve been a major party pooper for Mickelson to celebrate his 38th birthday by watching Woods win a third Open.

This was shocking, primarily because two-time U.S. Open winner Retief Goosen does interviews about as often as Bill Belichick tells knock-knock jokes. There’s no secret video of Goosen’s controversial comments, but he’s quoted in the London Times as saying Woods would’ve withdrawn had he been truly injured.

Before you dismiss his remarks, know that Goosen is something of an expert in this area. You may recall in 2005 he pretended he was going to win the U.S. Open for the third time until he shot 81 in the final round at Pinehurst.

The day after Goosen honked, Woods announced not only hadn’t he feigned injury over the weekend, it was way worse than he’d let on. So bad, in fact, that he’ll miss the remainder of the 2008 season to have yet another surgery on his knee and rehab a pair of fractures for 2009.

Here’s what we learned Wednesday of the severity of Woods’ injury that we hadn’t known before, courtesy of a statement on his website plus a behind-the-scenes account by his extra set of eyes, instructor Hank Haney:

- Woods ruptured his ACL after last year’s British Open while running in Orlando. So that explains why he only won four of the five tournaments he played in the weeks following. And on that same limp ligament, he won five of the seven events he played worldwide this year.

- He sustained a double stress fracture in his left tibia from working too hard to come back from the April 15 surgery.

- When his doctor last month advised against playing at Torrey Pines, Woods said, “I’m playing the Open, and I’m going to win.”

- Just weeks before the tournament, Woods could barely make it from the kitchen table to the fridge.

- The first time he bent down to read a putt since the 72nd hole of the Masters in April was the first hole of the U.S. Open last Thursday.

This is gonna be the first sports movie script to be ratcheted down a notch to make it more believable.

If Goosen was quoted correctly – and honestly, have you ever known a British paper to take a comment out of context? – he owes Woods his most sincere and immediate apology in light of Wednesday’s injury update. Not that it will matter. Goosen can ask Stephen Ames and Rory Sabbatini how quickly Tiger forgives and forgets.

Single Leg: What Woods Wins Open On and How Much of the Grand Slam He Captures in 2008

On its face (in part because of the frequent expressions of agony on Woods’ face), this U.S. Open merited discussion as one of the finest ever the nanosecond it ended.

Great course? Check. When was the last time you heard both the USGA and the players give two thumbs up to an Open venue? The scorecard had it as the longest course in championship history by a few hundred yards, but USGA officials tinkered with tee boxes each day and weren’t afraid to play it shorter. The greens were bumpy and fast but fair. The rough got deeper the further from the fairway a player strayed, allowing those who were barely off line to have a go at the green at their own expense. In short, the cheapest daily rate course to ever welcome a major championship proved itself worthy. Torrey Pines will not be one-and-done as a U.S. Open host.

Perfect conditions? Ditto. The weather varied somewhat depending on when the marine layer burned off, but there was no rain or excessive wind to exacerbate the typically-tough Open setup.

Good golf? Yep. Low scores were out there, though tough to come by. Woods and Mediate tied at 1-under 283. Perfect for a U.S. Open. And those two matched par in the playoff, too.

Human interest? In spades. There was Phil Mickelson trying to prove you can go home again and win his first Open. There was Mediate’s bid to become the oldest winner in championship history and his consolation prize of a burgeoning fan base. And, of course, there was Woods. On a course he first played as a 10-year-old with his dad, returning from knee surgery two months prior, grimacing repeatedly before, during, and after impact.

We could tell he was in pain (save for Goosen and maybe Oliver Stone); we just didn’t know how much until Wednesday. Woods’ performance instantly ranks among the most mind-boggling and superhuman of all time. He may as well have had Kathy Bates hobbling him each morning before he hit the practice tee. Misery loves company, as the old saying goes, which explains why we couldn’t keep our eyes off of Woods all weekend.

Drama? Give me a break. What Woods did on holes 13 through 18 Saturday alone would qualify as most players’ career highlight reel. The eagle from off the back of 13 green will no doubt go down as one of the greatest moments in major championship history, but I’m not even sure it was his best shot on that hole! That approach out of the dead grass right of the fairway from 208 yards was a foot away from blowing the cup to smithereens before eventually settling onto the fringe 65 feet north.

The 72nd hole birdie was simply absurd. Normal people don’t make putts like that. A downhiller moving gently to the left and violently up and down on the afternoon poa annua – the ball bounced higher off the ground than Phil Mickelson at the Masters – before catching the last possible arc of the cup, circling the south rim, and dropping in. I watched it again today just to make sure it stayed in. (It did.)

As impossibly clutch as the putt was, I’m still taken by what happened next. It’s the most unbridled reaction to a golf shot Tiger Woods has ever had. Ever. More than that uppercut in the 1996 U.S. Amateur against Steve Scott. More than after the other birdie he made to force a major playoff, the one against Bob May at the 2000 PGA. Yes, even more than the pitch-in from off the green at Augusta’s 16th in 2005. Watch it again here.

He reared back, pumped both fists three times, gathered himself, reared back for another fist pump, then turned to caddie Steve Williams and yelled so hard he partially doubled over. Wow. My goose pimples are bumpier than his putt right now. It’s the reason people watch when Tiger Woods plays and why they don’t when he doesn’t. He empties the tank every time he tees it up, and you feel rewarded when you invest your time into watching him play.

Now, his tank won’t be full until next year at the earliest. He expects a full recovery but not even he really knows how his body will respond to the rehab until he begins to hit balls again a few months from now. His year began and ended with victories at Torrey Pines. Perhaps he’ll be back in time to defend the first of those early next year. Until he’s back, the best we can do is bask in the single greatest act of on-field mental and physical toughness in sports history and hang on to that final headline Tiger wrote himself:

WOODS WINS THE BATTLE AT WOUNDED KNEE!
Posted by Grant Boone at 2:08 PM