This column appeared originally in "Grant Me This" on http://www.pga.com/.
First off, for those of you in metropolitan New York who wanted to see the final round of the Verizon Heritage but instead got invocation-to-benediction coverage of the Papal Mass at Yankee Stadium, you didn't miss much. Boo Weekley won the tournament for the second straight year, albeit in more somnolent style than last when he pitched in on the final two holes to win by one. Sunday, Weekley won by three, and it wasn't even that close.
For those of you everywhere else who may've hoped for the Pope but were stuck watching golf, here's a quick recap: decked out in the traditional but sassy white and tan number that said -- as Cal Naughton, Jr. in "Talladega Nights" suggested would be the case if Jesus wore a tuxedo t-shirt -- "I want to be formal, but I'm here to party," His Holiness encouraged the 60,000 in attendance to obey the teachings of the church while condemning a variety of social ills, such as Yankee Stadium's $10 beers and Hank Steinbrenner.
News cycles always make for strange bedfellows, but the confluence of Joseph Alois "Pope Benedict XVI" Ratzinger, the Bavarian-born pontiff, and Thomas Brent "Boo" Weekley -- the snuff-dipping, syllable-elongating golfer from the Florida panhandle -- has set a new standard by which all future news-making tandems must be measured. And while it's a tradition unlike any other that Masters winners often receive a congratulatory phone call from the U.S. President, a new rite of spring was born Sunday when Benedict buzzed Boo Weekley after the Verizon Heritage. GMT has obtained an exclusive transcript of that conversation and now proudly presents:
When Benny Met Boo (That's Boo on the left)

Pope: "Greetings, my son."
Boo: "Wussup there, Your Pope-ness, sir! Mighty nice-a-ya to call. I didn't even know you's a golf fan." 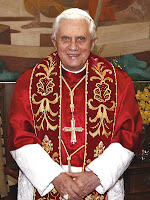 Pope: "Oh, yes, all my life. In fact, I'm in a Tuesday twilight league back home. Someone told me it's a ritual here in America for heads of state and other leaders to call the winners of sporting events to congratulate them on their conquests. Plus, I have free nights and weekends, so I thought, you know, 'When in Rome.'"
Boo: "Yessir, go on."
Pope: "That's it. 'When in Rome.' It's just a figure of speech."

Pope: "Yes, well, good playing today. You should be proud. Just not too proud."
Boo: "Aw, 'tweren't nuttin'. Last year was a heckuva lot more nerve wrackin' with Ernie Els on my tail. I's frettin' more than a one-legged man in a butt-kickin' contest!"
Pope: "I beg your pardon?"
Boo: "That was just one-a them thar figgers a-speech you's talkin' about. Kinda like 'That dog'll hunt.'"

Pope: "Ah, yes! I know that one! I believe that's one of Brother Foxworthy's favorites! I love that Blue Collar Comedy Tour! We were all listening in the Popemobile on the way to Yankee Stadium! While we're on the subject, perhaps you could explain this 'Larry the Cable Guy.'"

Boo: "I reckon I cain't help you on that one. All my friends is rednecks, and ain't-a one of 'em thinks he's funny. One of them unsolved mysteries, I s'pose, like when sumbuddy sees the Virgin Mary in a messa hash browns at the Waffle House."
Pope: "Good, I thought it was just me. Say, I caught some of the tournament during Mass today. Don't tell anyone, but I had them pipe the telecast onto the Jumbotron while everyone was looking up on stage. That pitch in for birdie on 11 was a miracle! Tell me, did you say a Hail Mary before you hit that shot?"
Boo: "Hail, no! I just hit and hoped and shor 'nuff the dang thing went in!"
Pope: "Not a praying man, eh? Does that mean you're not partial to people of the cloth?"
Boo: "Naw, they's fine, but those cloth britches I used to wear ga' me a big ol' rash down thar where the sun don't shine. That's why I wore them camouflage rain drawers for a-whall. I could send you some, if'n ya want."
Pope: "Too late! I bought a pair at the PGA Tour Store in the airport the other day. As a matter of fact, I had them on under my robe this afternoon. Comfy! Listen, my child, I've enjoyed our visit, but I need to go. We're flying out to Hollywood in a few minutes to meet with the producers of American Idol. They've asked me to give them my blessing on next week's theme: The music of Bobby McFerrin. Is there anything I can pray for you before I say goodbye?"
Boo: "Well, spring turkey season just ended back home. D'ya thank the Big Guy upsteers might let it go a fur piece longer?"
Pope: "I'm sorry, my son. I can't condone the killing of another living thing merely for sport."
Boo: "A-ight then, how 'bout if you let me bag a Tiger at the U.S. Open?"
Pope: "Now that dog'll hunt!"
Boo: "A-men, brutha!"
Pope: "That's 'Father,' my son."
Boo: "Just a figger of speech!"
Pope: "Sorry. I ain't never heared it."
Posted by Grant Boone at 7:36 PM

Good to have you back!