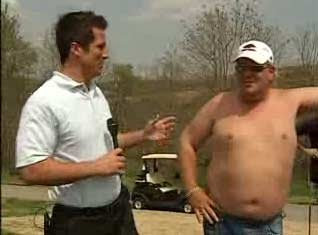 First off, it’s been a rather quiet week in golf. Not a single major champion has been interviewed topless for a small-market morning television show. In a related story, John Daly earned his one-week chip from Exhibitionists Anonymous.

Second, hold de Mayo. On the eve of a national holiday, Mexico’s favorite daughter, Lorena Ochoa, came up short in her attempt to win Cinco straight. Ochoa opened the SemGroup Championship in Tulsa with 73-74 and, despite a T5 finish, never contended in an event Paula Creamer won in a playoff over Juli Inkster. Ochoa’s trusty caddie, Dave Brooker, told me his boss took the previous week off, even though she’d won a record-tying four straight LPGA tournaments, because she was exhausted, especially from the event in Mexico where he said she signed at least 2,000 autographs a day and couldn’t even practice because of all the “craziness.” All of Mexico would’ve gone loco had Ochoa won Sunday. They celebrated her efforts nonetheless by beginning their Cinco de Mayo festivities a few hours early. And many here north of the border lent their support. Gringo clubs and bars here in the U.S., bound by NAFTA to effusively promote Cinco de Mayo despite the fact that most Americans’ knowledge of Mexican heritage consists of what they can pronounce off the drive-thru menu at Taco Bell, sold approximately 400 billion bottles of Corona.

Third, if you think I’m going to crack wise over the tragedy at the Kentucky Derby Saturday, you’re sniffing glue. I’m still getting hate mail from Barbaro Neigh-tion after this piece I authored a couple of years ago. There would be no time to cobble together candlelight vigils for Eight Belles. The filly was put to death on the same Churchill Downs track where moments before she’d finished second in the Derby. A year ago as Michael Vick was being sent to jail for running a dog fighting ring, I cracked that it was unfair to compare that heinous activity to horse racing because at least dog fighting doesn’t make animal abuse a society event. And then I asked anyone to justify horse racing as a sport, given how the animals are treated, or mistreated depending on your point of view.

No one gave me a reasonable answer, so I sought out my most trusted horse source. She’s a former co-worker who comes from one of America’s great thoroughbred racing families and who herself is now a prominent owner. She’s also one of my favorite people and not at all someone who’d try to protect the racing fraternity if horses were being abused.

About the Eight Belles tragedy and ensuing controversy, she told me:

“I think horse racing needs to look in the mirror and figure out together how to make the sport safer. That includes not breeding unsound horses to unsound horses, looking at the safety of track surfaces, and the use of legal and illegal medications. PETA’s claims are sort of BS. That horse didn’t get hurt because the jock hit her too hard or the trainer trained her too hard. It was a freak thing. Unfortunately, something tragic had to happen to shake them up. You aren’t quoting me, are you?”

Of course not. Well, yes, but I’ll protect your identity, Hoarse Throat. It still seems to me that the animals are being subjected to unhealthy stress, but I defer for now to my friend who knows way more about it than I do and cares more about the creatures than the cash.

Now, professional golf has its own problems. Fortunately, players being lethally injected on the course isn’t one of them. When golfers come up lame, they have procedures done or take time off or both. But when that golfer is Tiger Woods and a scoped knee-plus-rehab scratches him from this week’s PLAYERS Championship (or however they’re capitalizing it this year), it euthanizes – at least to some degree – the excitement surrounding the most important tournament owned and operated by the PGA Tour.

The Tour has always had status envy since breaking ranks from the PGA of America 40 years ago. The four most important events in golf – really five, if you count the Ryder Cup – are run by other organizations, leaving the league that runs professional tournament golf in the U.S. for most of the 10-month season continually alone in the on-deck circle during the Grand Slam. That’s why the Tour has pumped so many resources into making The PLAYERS not only its signature event but one that can at least come up in the same conversation with the four majors.

It’s tough to imagine Commissioner Tim Finchem and his coterie of executives doing anything more or better than what they’ve done with The PLAYERS. The date was moved from March to May in hopes of filling that two month gap between The Masters and U.S. Open with another big event. The golf course has morphed from comical to classic. The Brady Bunch-era pro shop was razed and raised in its place was a sprawling castle – the Tim Mahal – which was unveiled for last year’s tournament. And as a bonus, a bona fide star in Phil Mickelson won the 2007 edition to christen those most recent changes.

But just as the first big event of 2008 was ending, Tiger Woods put The PLAYERS in its place. Two days after a second-place showing at The Masters, Woods announced he’d had his left knee surgically repaired and wouldn’t play again until the U.S. Open. Woods would never verbally diss The PLAYERS, but he doesn’t have to. The surgeon’s knife cut through any confusion.

Knowing the knee needed repair, Woods planned the procedure at such a time that he wouldn’t miss the two tournaments that mean the most to him. That meant The PLAYERS would be cut along with his left leg. Kneed I say more?

I don’t think Woods has specific disdain for this event or the TPC Sawgrass, but neither do I believe the course is one of his particular faves. More than anything, I get the feeling that Woods – who is not only the world’s best player but also the most powerful athlete in all of sports – enjoys reminding the Tour, in both subtle and strong ways, that he’s the man.

The 2007 Mercedes-Benz Championship kicking off the inaugural FedEx Cup season? Sorry, you guys go on and get started. The first-ever PGA Tour playoff? Too tired. From what? Winning majors run by other governing bodies. The 2008 Mercedes-Benz, now on the heels of an offseason expanded in part to placate Woods? Nope, still chillin’ with the fam. And now the surgically-repaired schedule that has him conspicuously absent from the Tour’s biggest week of the year.

You hate to beat a dead horse, but it’s bad enough when the Tour’s stud thoroughbred doesn’t win or place. It’s even worse when he doesn’t show.
Posted by Grant Boone at 4:10 PM