First off, in the words of (as Matt Foley called him) Bill Shakespeare, parting is indeed sweet sorrow. This week, two more major American cities said goodbye to gas prices which per gallon began with the number 3. The pumps in California these days read like an NFL defensive back’s 40 time.

On Tuesday, Hillary Clinton bid farewell to any mathematical chance of winning a majority of delegates in the Democratic Party’s Presidential race. She long ago parted company with the reality that she wasn’t going to win. Hillary’s like the twisted offspring of Monty Python’s Black Knight (Obama has a majority of delegates? “It’s just a flesh wound!”) and Phil Hartman’s Johnny O’Connor in this SNL skit (Mathematically eliminated? “Don’t mince words! Tell me where I stand!”).

Wednesday, we lowered the curtain on season seven of American Idol, which ended with the relative Goliath of the two Davids, Cook, rocking the cradle of the baby-faced Archuleta and taking the title. (My six-year-old daughter didn’t want either one to lose, so she had me vote for both. Cook won by 12 million votes, so she’s off the hook.) The highlight of the show was a tie between a) Ben Stiller, Jack Black, and Robert Downey, Jr. impersonating the Pips behind a 1970s video of Gladys Knight; and b) the red sportcoat worn by judge Randy “Molten Hot Lava Bomb” Jackson which looked like something he snagged from the Captain K 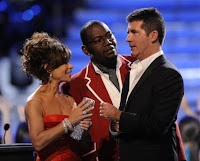 Nearly 100 million people voted for the two Davids, only about 20 million fewer than the number who cast ballots for the most powerful office in the world in the U.S. Presidential election of 2004. In defense of the American people, they knew their Idol votes would actually matter. In fact, I can’t think of a good reason not to stage the general election in November the same way. Put the candidates’ numbers on the screen. Give people a few hours to call in their votes. Total them up and announce the winner the next night. You could even bring back past Presidents to do a few show tunes to fill the hour. Sure, it’d be easy for people to vote multiple times, but that only means they’re really passionate about their nominee. If you care enough to risk carpal tunnel syndrome dialing in four hundred times in 90 seconds, I say you deserve an extra vote or two.

Finally, we have the rest of this year to say goodbye to Annika Sorenstam. Sitting third all time with 72 wins and currently second on the money list, the LPGA legend announced she’ll retire at season’s end to, among other things, begin a family with fiancé Mike McGee whom she’ll marry next April.

We first heard of a talented, skinny Swede as she starred for the University of Arizona, winning the 1991 NCAAs and losing in the finals of the ’92 U.S. Amateur. After college, she won Rookie of the Year honors on the Ladies European Tour and LPGA in consecutive seasons. Annika’s first LPGA title was the 1995 U.S. Women’s Open, which she successfully defended the following year. She’d win 17 times over the next four years, but none of those were majors, prompting a particularly catty characterization by one of her peers that Sorenstam was the “Queen of the ShopRite Classic.” But over the next six years, Annika bagged enough biggies to max out her place in the Express Checkout line. She won at least one major each season from 2001-2006 to reach her current total of 10 while continuing to take home regular tournaments like they were on sale two-for-one. Along the way, Sorenstam kept finding herself on shorter and shorter lists of the best women players of all time, repeatedly reinventing herself as a player through an aggressive fitness regimen and as a public figure who evolved from painfully shy to poised and personable.

By the time I met her in March 2000, she was Annika 2.0, having already developed from teeny to toned in an attempt to keep up with Karrie Webb who’d overtaken her as the world’s best player in 1999. Sorenstam would undergo at least two more noticeable changes to her body over the next few years, bulking up through intense weight training then slimming back down to her current form a couple of years ago.

I think Annika always found it much easier to overhaul her physique than her public image. She had complete control over the former; the latter not so much. Naturally introverted, Annika felt compelled because of her eye-popping accomplishments to carry the LPGA banner wherever she went, including to places like the Colonial in Fort Worth where five years ago this week she competed in her first and only PGA Tour event. (She shot a highly respectable 71-75 to miss the cut by four.)

I’m pretty sure Annika wouldn’t have complained if she’d never had to do an interview; but in the eight years I covered her on a regular basis, she never once turned me down, even after being offended by a remark I made in jest that she didn’t understand. (I know it’s hard to believe someone wouldn’t get my humor, but stay with me.) She’s been a fierce competitor, but it always seemed to me that through the years Annika has derived more pleasure from trying to perfectly execute a golf shot than merely defeating an opponent.

Those opponents haven’t always liked Sorenstam for reasons I don’t entirely understand. I know for some, there was a junior high jealousy of the encomia heaped upon her during that amazing run in the middle part of this decade when she was the only reason many paid attention to women’s golf. But her peers have had no choice but to respect the record Annika has compiled in her 15 years on the LPGA Tour. Beyond the numbers, Sorenstam at her best convinced you that she’d done the impossible by mastering the game.

Determining supremacy in any sport is subjective, at best. As far as the LPGA goes, Kathy Whitworth has more career wins than Annika. Mickey Wright has more wins and, by all accounts, had a better swing. But if, unlike my daughter, I had only one vote, I’d give it to the one who did it under the most scrutiny. Give me Annika.

Do you disagree? Don’t mince words!
Posted by Grant Boone at 4:20 PM