Golfers will say you've "overclubbed" if the woman you married is way better than you should have had. In football parlance, it's called "outkicking your coverage." I'm sure poker players would have a term, too, if they'd ever get up off their fat aces and actually ask a girl out. (It's difficult to imagine the conversation ever progressing past, "Hey, little missy. Wanna come watch the flop to see if I flush?")

Pick the metaphor, and it applies to me. On this day 13 years ago, accompanied by her dad and "Trumpet Voluntary," Amy Nichols voluntarily walked down the aisle at Aldersgate Methodist Church in Abilene, Texas a little after 4 p.m. and agreed before God and man to become Amy Boone.

Scientists have a Rule of Thirteen, so named because, in order to generate a base formula (containing only carbon and hydrogen), the molar mass of the unknown substance is divided by 13. In a lot of ways, that rule describes our 13 years of marriage.

(Okay, I have no idea what that means. I just threw it in because Amy's dad teaches science at ACU. Thought it could be a telepathic, father-in-law/husband bonding moment. He's the carbon, I'm the hydrogen... Moving on.)

This is an unsuitable forum for me to express my love for Amy or to describe her greatness. Actually there isn't such a forum. Nor is there poetry, song, or work of art yet created that captures the fullness of a life with her. You'd have to be there. On the days in between the anniversaries. The January 12ths and July 22nds and October 14ths that pass without revelry but which when compounded produce a richness one can only appreciate in retrospect and humility.

You want to know the secret to a good marriage? Choose well. You can be a great spouse: loving, caring, considerate. But if you don't choose your mate well? Well, mate, you might just experience another scientific phenomenon: spontaneous combustion.

I've made too many poor decisions to count over the last 13 years. But the one I made November 23, 1991 - or rather the one she made on my behalf - has covered a multitude of sins.

Where Will Rain Man Buy His Underwear?

In case you missed it, Sears and K-Mart have announced they're merging.

On one hand it reeks of a cheap publicity stunt by aging, passe celebrities - imagine the buzz in Hollywood if Loretta Swit from M*A*S*H married Welcome Back, Kotter's Ron "Horshack" Palillo...keep thinking...got it? There you go.

But on a personal level, I'm sure I'll enjoy the convenience of avoiding one store instead of two.

Last week, the NFL re-upped with CBS and Fox, guaranteeing that those two networks will televise football on Sundays.

Based on last night's intro to the Eagles-Cowboys' game on ABC, it would appear the league is considering moving Monday Night Football to Cinemax.

For Nicolette Sheridan, who dropped her towel and jumped into the arms of Philly receiver Terrell Owens (it was the first of T.O.'s many catches last night), it threatens to tarnish a career she's worked so diligently to build through such epic films as "Beverly Hills Ninja."

When it comes to developing young fans, it seems the league is the one throwing in the towel.

Posted by Grant Boone at 3:39 PM No comments:

The ABCs of G, PG

Parental Guidance: knowing when a child is too young to take to the movies.

Here's a general rule of thumb - if your youngster is smaller than the largest tub of popcorn, wait for the DVD.

This man was attacked and injured after jumping into a lion's den at the Taipei Zoo and trying to convert the lions to Christianity. I only wish I was kidding. 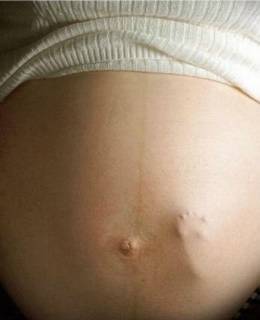