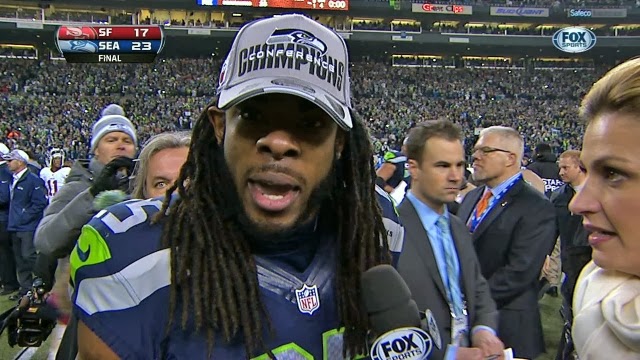 But as I sat here at home this morning on a day set aside to remember Dr. Martin Luther King, I began wondering if it was easier for me to dislike that diatribe and, thus, the Seahawks cornerback, himself, because he is a black man with dreadlocks who spoke angrily and aggressively into a microphone held by a pretty, blonde, white woman (Fox's Erin Andrews).

Surely my distaste had only to do with what he said. (Here is what Sherman had to say about what he said.) Had a white player screamed the exact same thing in the exact same way to, let's say, Pam Oliver (Fox's veteran sideline reporter, who is African-American), I believe I would have been just as off-put. I believe.

But if I, and other white people, knew that aforementioned imaginary white player was a straight-A high school student from a two-parent family who chose to play college football at Stanford because of its academic strength or that his foundation specifically helps inner city kids with resources to help them excel in school - all of which describe Richard Sherman - would we have more readily given him a pass, excusing his rant as pure postgame adrenaline? Or would we have even needed to know that backstory to chalk up the white guy's conduct to simple sports braggadocio?

I hope not. At least not most of us. Surely the viciousness spewed at Sherman on Twitter (WARNING: graphic language), the kind of ferocious and feral hate speech that would have even been startling 50 years ago in the deepest recesses of the segregated South, came from a minuscule minority. Surely.

But on this day especially, I want to at minimum have the courage to ask myself hard, uncomfortable questions about what is really going on in my heart and head when it comes to how I see people who are different from me in some way. It seems the very least I can do to honor and mimic the man who gave me this day off.
Posted by Grant Boone at 10:24 AM No comments: