Mudders Day: Statue of Limitations, Bronx Cheers, and Other Dirt From a Wet and Wild Weekend Abroad

The great American priest, Father James Keller, once wrote, Every mother has the breathtaking privilege of sharing with God in the creation of new life. She helps bring into existence a soul that will endure for all eternity. Amen.

Sadly, Father Keller died before the advent of Frequent Flier Miles. Otherwise, I'm sure he would've added something to the effect of, "So for cryin' out loud, take the occasional weekend off already." So Amy and I did. On Mother's Day weekend. Thus enjoying the equally breathtaking privilege of pawning off on Nana and Papa the three lives she helped create. (Before you object, remember those souls she brought into existence will endure for eternity. What's three days?)

Amy's always wanted to go to Fenway Park in Boston, so we made plans to be there when the Red Sox hosted a weekend series against our beloved and beleaguered Texas Rangers. When we realized the Rangers' road trip continued in New York, we figured we'd do a little Texas two-step on over to the Big Apple.

Two round-trip tickets to New York? 50,000 AAdvantage Miles.
One night at the LaGuardia Courtyard? 20,000 Marriott points.
Having the smoking hot mother of your children insist you take her on a whirlwind tour of American League baseball shrines? Priceless.

Little did we know, there would be a worm inside that Big Apple and a fly in our chowder.

We alighted Saturday afternoon at LaGuardia (Italian for "9 dollar hot dog") International Airport, which I believe was named for the former mayor of New York City, Fiorello H. La Airport. No sooner had we landed than I learned the Rangers game in Boston, still six hours away from the scheduled starting time, had already been called because of rain. Not encouraging.

Undaunted, we hopped in our rental car, crossed the Brooklyn Bridge, and headed straight for Battery Park on the southern tip of Manhattan where we hoped to catch the ferry over to Liberty Island to see the Lady and her Lamp. After finding a parking garage a couple of blocks from the ferry, we surrendered our keys to a guy who knew enough English to say, "Don' worry 'bout a t'ing." Which immediately made us worry.

The walk through Battery Park was incredible. Not a cloud in the sky, temps in the 60s. Tourists, locals, and sidewalk merchants enjoying each other's company and soaking in the sun. The smell of fake Rolex in the air...

Rounding the sidewalk, we saw her. Lady Liberty. For so long, I thought she wasn't real. That she was just some Hollywood fabrication like the Lunar Landing and Paris Hilton. But there she was, across the Hudson River, perched proudly out in Upper New York Bay. We had to see her up close, so we got in line for ferry tickets at Castle Clinton. With only 20 people ahead of us in line, the bad news made its way backward like a New York cabbie's multiethnic body odor: no more ferry tickets today. Lady Luck, she wasn't.

With our initial plans thwarted, we cried in despair, Is there anything else to do in this city? Turns out, there was. As Jack Lemmon replied in The Out-of-Towners when his wife couldn't get over the size of the city, "Of course it's big. Why do you think they call it New York?"

We walked north, which we felt was a strong tactical maneuver, seeing as how the only thing south was the East River. Before long, we'd reached Ground Zero. There aren't really words to describe how you feel when you stand on that spot, so I won't try. Except to point out an interesting sign on the fence which fronts the on-going construction of a memorial on that sobering sidewalk. The placard asked visitors not to give any money to peddlers or panhandlers out of respect for the sanctity of that site. Apparently, one man's sanctity is another man's supper. There were at least a dozen town criers and t-shirt salesmen, all with their mouths open and their hands out. 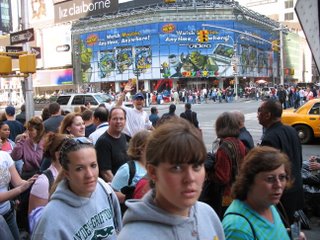 With the rest of Manhattan there for the taking, we went underground to hop the #1 train headed north to 42nd Street and Times Square. What a gas. Literally. The neon lit up the city block otherwise darkened by the sun-shielding skyscrapers pari passu. We had a slice of original New York pizza, dodged the trash bags on the corner, strolled through Central Park, and generally acted like tourists for the better part of the afternoon. (That's me with the big head and my mouth open. No, you're looking at Shrek. I'm the one with my hand up.)

As evening approached, we made our way back to the car - it was there! - and began the four-hour journey to Beantown. We thought we were heading to Massachusetts; we wound up instead in a State of Emergency.