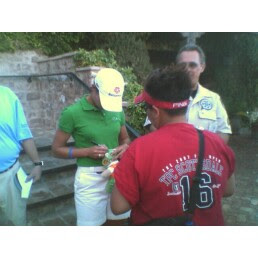 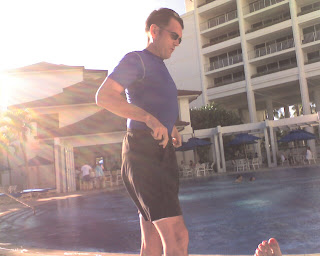 First off, after the outpouring of praise for last week’s column – okay, it was just one guy this morning at Starbucks, but he really poured out a lot of praise as the barista in-poured his coffee – I was tempted to recap how Tiger Woods’ performance at the Dubai Desert Classic was covered locally by Al Jazeera and lead anchor Mahmoud Burgundy (“Stay sheik, Middle East.”). 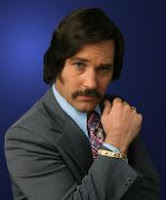 But this is no time to kibitz. As Brian Fantana of the Channel 4 News Team would say, the mood here is tense. The world is perilously close to spinning off its axis. Consider the disturbing events of the past week and then tell me nothing’s wrong:

1) Peyton Manning won the Super Bowl, picking apart the NFC’s best defense.
2) Tiger Woods lost in Dubai, frittering away a chance to win on the back nine.
3) Not a single Cincinnati Bengal was arrested, extending the team’s streak of good citizenship all the way back to late January 2007.
4) Dave and Oprah are in love, proving it by their snuggly appearance in what was the highlight of the Super Bowl ads and promos.

There are certain things you count on to give you a sense of stability in your life. Like Britney Spears exchanging random nuptials or President Bush saying “nuke-yuh-lur.” Only Lindsay Lohan’s decision to jettison rehab and party with Paris Hilton kept the globe from spontaneously combusting.

The juxtaposition of Manning and Woods Sunday, in addition to making us wonder what the world’s coming to, begs an examination of how the sports media at large tosses around the concept of choking.

For years, the albatross asphyxiating Manning was that he couldn’t win the big one. And prima facie, that was true. He was the starting quarterback for three-and-a-half years at Tennessee. In that time, he neither won a national championship nor beat the Vols’ archrival, Florida. Only a handful of QBs ever accomplish the former, of course, but it was at the very least ironic that UT won it all the year after Manning left. As for the latter, Florida went 34-4 in the three years Manning faced the Gators as a starter, so he wasn’t alone in his futility. Still, it’s not unreasonable to expect a marquee player, especially one with his hands on the ball on each offensive play, to lift his teammates to a win over the one team your fans insist you conquer. And in those three games in which Manning started and lost against Florida, he was definitely a key culprit in two (1996 and ’97).

On the other hand, how good does a player have to be to merit such criticism? This good: Manning took a talent-rich but second-tier program and elevated it to a perennial top five team, going 39-6 as a starter in the nation’s best conference and leading Tennessee to its first SEC title in seven years. In the process, he turned the Tide. The Vols hadn’t beaten their most storied nemesis, Alabama, since cassette tapes were cutting edge. But Manning directed a 41-14 rout as a sophomore and began an on-going streak that’s seen UT win 10 of the last 12 in that series.

More than any of that, though, Manning was the face of college football for three full seasons and has been the same for the NFL in each of his nine pro seasons in Indy. Add the fact that quarterback is without question the most difficult and pressure-packed position on the field, and it’s not much of a stretch to say that no football player – college or pro – has been under the gun more in the last decade than Peyton Manning.

He hasn’t played his best in the biggest games, but few have played in as many big ones as he. And there’s something to be said for continually getting his team in position to win it all. Now, he has his championship. Good for him.

Sounds a lot like another of sports’ good guys, no? The major monkey weighed so heavily on Phil Mickelson’s back that he could barely get off the ground when he rolled in the winning birdie putt at the 2004 Masters. Mickelson has three biggies now and figures he ought to have at least four, what with the 72nd hole debacle at Winged Foot last year.

Manning and Mickelson bear a remarkable likeness in many ways. Each was a stud amateur, each entered the league with enormous expectations (none higher than his own for himself), each was successful early as a pro, and each was poised to be the defining player of his generation.

Here’s where it’s tough to continue to the comparison. For a variety of reasons, not the least of which is that he’s still just 30 and should have six to eight solid seasons left, Manning is in position to close the gap on Tom Brady as the best NFL quarterback of the current millennium. Because there’s only one championship per season as opposed to golf’s four majors, Brady’s edge over Manning has shrunk considerably since Sunday night went Manning’s way. If Manning and Brady end their careers separated by no more than one Super Bowl title – say, 3-3 or even 4-3 in favor of Brady – Manning likely goes down as the best of his generation and maybe the best of all time because he’ll have superior overall stats.

In golf, there is no debate. We know for sure now that Mickelson will not be the best of his era despite being probably being among the top 15 of all time. (Remind me to do a column on that list sometime.) Woods is by far the best player of this generation and maybe all of them by the time he’s through. Even if Mickelson averaged a major a year for the next four years and Tiger won none in that time – and I think the former is actually more likely than the latter – the major ledger would still read 12-7 Tiger.

But this isn’t just about numbers. It’s also about perception. There’s a sense that Woods and Brady will find a way to get it done when it matters most whereas you tend to wonder if Mickelson and Manning are going to give another one away. That perception is shaped by how often and, perhaps more importantly, when each athlete experienced victory and defeat.

To wit: both Woods and Brady won their first championships as a pro in their initial attempts – Woods, the 1997 Masters and Brady, the Super Bowl in his rookie season of 2001. And both kept on winning regularly, padding their respective resumes with championships. Mickelson and Manning, despite having a head start, kept coming up short in the events where legends are made. To their credit, both kept saying the right things when they lost – “I prepared as best as I knew how,” “I just have to work harder,” “Yes, it hurts;” and when they finally won – no lashing out at critics, just excitement and gratitude for those who’d stood by them and helped them get there.

The truth is, Woods and Brady have tasted their share of defeat, too. Tiger’s had, by my count, at least four majors ripe for the picking that got away. And as recently as Sunday in Dubai, he stumbled down the stretch. In fact, for about 15 minutes, he played like me. On the par five 10th, he hit a shot I mastered long ago, the fairway metal pop-up that went about half as far as he intended. On the green, he stayed in character – which is to say, mine – and three-putted for a debilitating bogey on a hole where he should’ve made birdie. Then at the par three 11th, he borrowed another beauty from my repertoire, chipping his second shot from the fringe into the greenside bunker and making bogey again. That’s when Tiger quit channeling my golf game and regained his own consciousness, birdieing four of the last six holes to post a number which both the winner, Henrik Stenson, and runner-up Ernie Els eventually bettered.

As for Brady, the Golden Boy has settled for bronze and silver the last two years, losing a divisional playoff game to Denver last year and the AFC Championship Game to Manning and the Colts two weeks ago. In the loss to the Broncos, he threw an end zone pick that Champ Bailey returned all the way for a score. Against Indy, Brady was picked off in the closing seconds with his team down four and driving.

So did Tom and Tiger choke in those respective situations? Depends on the definition. Choking isn’t simply not winning. I think of it more as the heat of the moment causing you to do something you wouldn’t ordinarily do in less stressful conditions. Greg Norman’s Masters portfolio provides the perfect case study. In ’86, when he blocked his approach shot at 18 into Myrtle Beach when he knew a birdie would’ve beat Nicklaus and a par forced a playoff, pretty good chance that was choking. But a year later, when Larry Mize made a 1-in-100 shot from off the green on the second hole of their sudden death playoff, that’s having the title taken away from you.

In the aforementioned cases, most would say Brady and Woods didn’t choke because they’ve come through so often before. Jeff Quinney, on the other hand, will hear whispers that he choked at the FBR Open in Phoenix Sunday because he coughed up a late lead with a bogey-bogey finish and opened the door for Aaron Baddeley to win. Two things to remember:

Some players handle pressure better than others. They just do. Who knows why? But yes, I’d rather have Derek Jeter than Alex Rodriguez with two outs in the ninth and the game on the line. Doesn’t mean that A-Rod couldn’t get a hit or that Jeter definitely will. It just means some people have that flair for the dramatic. Most athletes don’t consistently perform their best in the most intense moments. We should celebrate those who do rather than think that’s the norm. (CAUTION: In no way should this be taken as encouragement to root for the Yankees.)

Good players choke, too. Just because Tiger Woods has a history of playing his best at crunch time doesn’t mean he’s immune to succumbing to the pressure of a given moment. He essentially admitted as much when he talked about trying to win last year’s Masters for his dying father. That only makes him human, which we should keep in mind as we watch him so regularly achieve the seemingly superhuman.

I hope Tiger’s performance Sunday in Dubai serves to remind us how rarely he’s ever done that and of the greatness we’ve had the privilege as fans to enjoy. I hope Peyton Manning can finally relax and enjoy the moment, even if his Super Bowl MVP trophy doesn’t fit into the overhead compartment on his flight to the Pro Bowl in Hawaii. And I hope in his disappointment, Jeff Quinney and anyone else who’s ever felt like a choker watched highlights of what happened to Woods and Manning Sunday night and took encouragement from both results.

Remember what we learned from Dave and Oprah: things can always change for the better. (And don’t talk with your mouth full.)
Posted by Grant Boone at 12:05 PM No comments: