"My Name Is Dick - Do You Know What That Means?"

Al Campanis and Jimmy the Greek are laughing in their whitewashed tombs. They've each moved down a notch on the list of Dumbest Things Ever Said By Public Figures thanks to the fine work of Richard Riordan, former mayor of Los Angeles and soon to be the ex-Education Commissioner of California.

Last week in Santa Barbara, Riordan was meeting some of the students in an elementary school classroom when a 6-year-old girl, Isis D'Luciano, told Riordan her name meant "Egyptian goddess." Confused, or maybe drunk - it was already mid-morning by then - Riordan responded, "It means dirty, stupid girl," then chuckled the chuckle of a man whose reputation and public life was flashing before his very eyes. When the little girl repeated the correct meaning of her name, Riordan replied, "That's nifty!" proving his vocabulary was every bit as anachronistic as his sense of political correctness.

The story took an even more bizarre turn at that point when the superhero Isis, not seen since Saturday mornings in the late '70s, appeared out of nowhere and kicked the crap out of the commissioner. 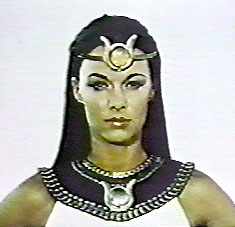 Isis Educated Riordan On The Proper Way To Speak To Girls

This incident further proves every politician should whenever possible try to emulate former President Bill Clinton, whose exchange with the little girl would've no doubt gone like this:

Isis: "Do you know what my name means?"

Clinton: "That depends on what your definition of 'is' is, Isis."

(Then again, upon remembering how hot JoAnna Cameron, the actress who played Isis in the TV series, was in those days, Clinton would've likely appointed a special investigator to determine her whereabouts and availability. He might have even shouted, "Shazam!" which is not just an expression of excitement but also Isis's crimefighting cohort.)

I bet he's give his James Westfall to be able to take that back.