Nicholas Boone came into the world eight years ago tonight at warp speed and hasn't slowed down since. Within minutes of being born, he was bowing his back and cocking his head, as if to take everything in. He was crawling at six months, walking at nine, running on his first birthday. He had no idea where he was going, mind you, but he was making great time.

He still runs from room to room inside the house, all over the yard outside, and is a study in perpetual motion. Which could explain why he has 0% body fat and eight-pack abs - one for each year. (He has his mother's lean physique. The only eight-pack I have is a box of Pop-Tarts.)

What he gets from me is a love of sports and comedy, which in the case of most of the teams I root for is the same thing. To understand Nicholas' innate interest in entertaining is to see him in his high chair - couldn't have been 9 months - making fart noises with his mouth in a (successful) attempt to make Andrew laugh. His comedic timing is natural and genius. If he senses he has a hook in you, he absoutely won't let go until you've spit out whatever you're drinking and dropped to your knees out of breath. (If you need something to clean up what you just spit out, perhaps you can use this pink sponge he named "Precious McGee" for reasons we still don't know.) 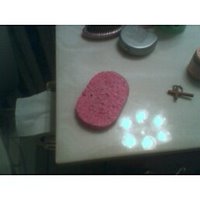 There's nothing contrived about him. What you see with Nicholas is what you get. We used to joke that Andrew was our Pharisee - because he always strived for perfection - and Nicholas our publican, a smidge more mischievous but immediately repentant, as well. Almost as if he's saying, "I did it, and I'll take my punishment if that's what it takes to be right with you again."

Nicholas is keenly observant. When he was three, he learned the mannerisms of both worship leaders at our church and took turns mimicking each in his own praise services in our living room, even occasionally calling out invisible members whom he felt weren't really giving it their best.

His numerous Nicknames have been well-earned:

Monkey Boy - This has to do with his lemurlike proclivity for latching on to my arm or leg and hang on as I walk.

Dr. No - His first response to nearly everything is negative to the point that even he laughs when we call him on it. He doesn't like surprises. Just tell him where things stand. He'll ask me to record games while he's sleeping, but by the next morning, he'd rather you tell him the score than watch it as if it's happening live.

Staremaster - Nicholas has a great stare. He's constantly soaking things in, trying to process them, all while his eyes stay locked in.

Everything with Nicholas is natural. I've never once shown him how to throw a ball or swing a bat. That all came pre-programmed. When he's not playing sports, he's watching it on TV. Or reading about it. There's a program at his school that rewards students for how many books they can plow through. Nicholas couldn't care less. Give him the latest issue of SI or the morning sports page. 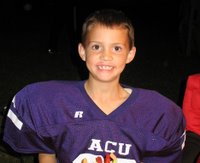 I've always had a sense that Nicholas has, from the day he was born, been a bit unsure of his place, so he's determined to make his presence known. It's worked.

Happy birthday, Nicholas. You are my son, and in you I am well pleased.
Posted by Grant Boone at 2:19 PM

Zero comments? What the...??? Lemme fix that. HAPPY BIRTHDAY, NICHOLAS!!

Nicholas Boone makes me glad to be a minister. His joy, his love, and his it's-not-hard-to-tell-he's-Grant's-son funny expressions are wonderful.

And . . . he fits right in with the whole amazing fam.

as always, great post. But that next to last paragraph I find amazing. that you have observed/felt that and nurtured it is wonderful...I just realized that you might think this is about your communion experience, in case you don't check, this is on the post about Nicholas.

Now I am going to read the next to last paragraph on your current post and see if this comment makes sense there.